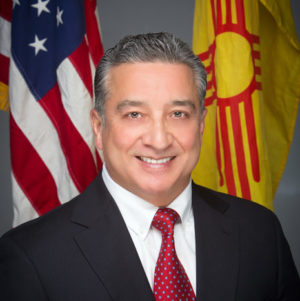 Commissioner Joseph M. Maestas was elected to the New Mexico Public Regulation Commission (PRC) in November 2020, and sworn into office on January 1, 2021. He will serve out a two-year term ending on December 31, 2022, as New Mexico transitions to an appointed commission. Joseph is a native New Mexican, land grant heir, and acequia water rights owner. He is the great-grandson of a state constitutional delegate, Jose Amado Lucero, and proud product of our public school system. Joseph’s strong work ethic was forged at an early age growing up on a small farm and helping to run a small, family-owned business in Santa Cruz, New Mexico. Joseph served in a number of regulatory roles as a Federal civil servant for over 30 years, and he specializes in Federal regulation, transportation, and water resources. For the three years prior to his election to the PRC, Joseph worked as a business development manager for a private engineering consulting firm. Joseph also served as a local elected official for 14 years, including as a Santa Fe City Councilor and an Espanola Councilor and Mayor.